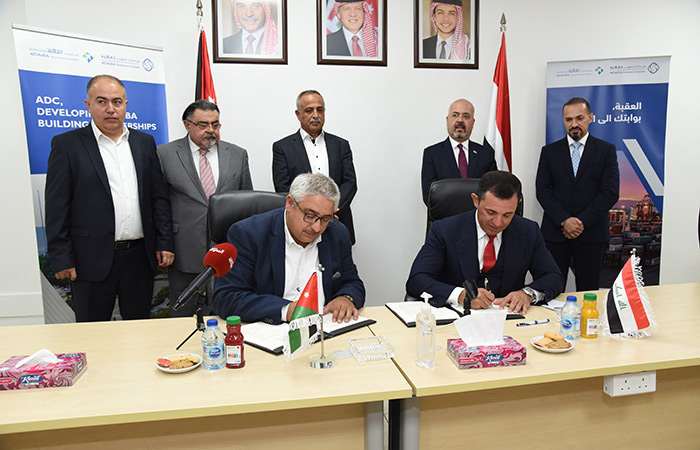 Oil Petroleum Products Storage & Logistics Company (PSC) (OPPL), represented by Iraqi businessman and investor, Dr. Ahmed Al-Jibouri, has recently signed the most strategic and exclusive agreement in Jordan’s history with Aqaba Development Corporation (ADC); that is the central development arm of the Aqaba Special Economic Zone Authority (ASEZA). This agreement aims to establish the Aqaba Storage Terminal for Crude Oil & Petroleum Derivatives, an exclusive terminal that will be the first of its kind in Jordan and the region. The Oil Petroleum Products Storage & Logistics Company (PSC) (OPPL) will handle the project’s execution to establish and develop specialized tanks for crude oil and oil Derivatives that are key for storage, and import and export transactions. The company will also provide logistic and handling services, with a cost that will amount up to 100 million US Dollars.

The agreement of land lease and project execution was recently signed by Dr. Ahmed Al-Jibouri, CEO of Oil Petroleum Products Storage & Logistics Company (PSC) (OPPL), and H.E Mr. Bashar Abu Rumman, CEO of ADC, in a signing ceremony that took place at ADC’s premises in Aqaba. The event was under the patronage of His Excellency Eng. Nayef Bakhit, ASEZA Chief Commissioner and His Excellency Mr. Haider Al-Athari, the Ambassador of Iraq in Amman.

The agreement involved leasing the land where this project will be executed, with the area of around eighty-three dunums (83,000 sqm.) located at the southern zone, next to the Oil Terminal. It also involved the project’s commissioning and preparations that will take two years upon signing, along with the project’s execution that will last up to 40 years for the Aqaba Storage Terminal for Crude Oil & Petroleum Derivatives to be established. The project is planned to have a 360,000-cubic-meter storage capacity, which is equal to more than two million barrels of oil derivatives and crude oil.

On this significant occasion, Dr. Ahmed Al-Jibouri, CEO of Oil Petroleum Products Storage & Logistics Company (PSC) (OPPL), stated: “We are filled with pride to have been commissioned for such a strategic project and we look forward to executing this project, since it is seen to be a quantum leap that will certainly put Jordan on the map for crude and oil derivatives trading. This terminal will undoubtedly be a focal point that facilitates all import and export oil tractions for all countries in the Gulf, Africa & Mediterranean, due to its premium location. Additionally, the Aqaba Storage Terminal would be considered as a significant platform that stores crude oil in a safe and stable environment, and this all will not only improve, but help boost the economy both locally and regionally.”

Dr. Al-Jibouri also highlighted that Oil Petroleum Products Storage & Logistics Company (PSC) (OPPL) is the ideal company for developing and executing such a strategic project, since it is specialized in crude oil and oil derivatives. The company also follows the utmost international standards of safety, environmental and quality assurance throughout the processes of construction, operation and storing.